I am going to take a short - but planned - blogging break.  My husband is having surgery on September 2, and rather than leave you wondering, I thought I'd tell you what is happening.

Phil had a dermatologist look at a spot on his right wrist three years ago, and after a cursory glance, the doctor declared "it's not cancerous, don't worry about it".  Well, we didn't, and that was a mistake:  he now has a melanoma that is "of medium depth".  The dermatologist referred us to a surgeon because he was concerned the cancer might have spread to the lymph nodes, so on that Friday, Phil will have the melanoma removed, which will require a skin graft to close, as well as a lymph node biopsy, as well as removal of a strange spot on his right ear.  If you know anything about skin grafts, they require the use of a vacuum machine to remove moisture from the graft, which Phil will have to carry around for six days following surgery.  We were told that there shouldn't be too much pain, but that remains to be seen.  At the least, it will be a long couple of weeks as Phil heals, and I will have to help him with some of his basic needs until he can get the wounds wet.

Some of my readers know that I suffer from fibromyalgia.  Stress is a trigger, and I certainly have been enduring a lot of that.  I was also recently diagnosed with TMJ, which is not uncommon amongst fibro patients.  My doctor told me to take my muscle relaxant on a regular basis - at bedtime - to help with it; it was also helping with terrible pain in my right arm.  Unfortunately, it made me terribly sleepy, but after several days without it, my TMJ has gotten very bad, so I'm taking it again.  It's a terrible place to be in - needing to be alert to drive, interface with medical personnel, care for my home and family, but being so sleepy that I can hardly function.

Hence my blogging break.  I hope that by the time I'm back - probably in a couple of weeks - I'll have a new purse to share, as well as a cross stitch project or two.  See you then!

P.S.  I'll be updating my husband's Caring Bridge site following his surgery, if anyone wants to stop by and read it.  Click here.

The last event on August 23 is my parent's anniversary.  They have been married 53 years! 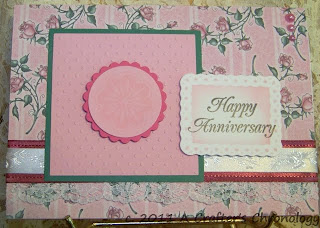 The paper is all from my stash.

The greeting stamp doesn't have any company listed on it.  I stamped it with Brilliance "Lightening Black" ink, then cut it out using "Lattice Rectangles" by Spellbinders.  I used my sponge dauber and Memento "Angel Pink" ink to add interest.  The squares are Spellbinders Classic Squares Large and Small, and the circles are Classic Scalloped Circles Small and Standard Circles Small.  The medallion is from the "Baroque Motifs" set by Stampin' Up!  This has been my go to set of late.  I again used "Angel Pink" ink by Memento.

The mauve ribbon is by Stampin' Up! (discontinued), and the white embossed ribbon I believe came from Home Sew.  The pearls in the upper right corner are by Queen & Co.  The color is "orchid", and I purchased them at A. C. Moore.

August 23 is also my son-in-law's birthday!  Anthony's card is much simpler than the last one I shared, but then masculine cards don't call for all the bling and other pretties, right? 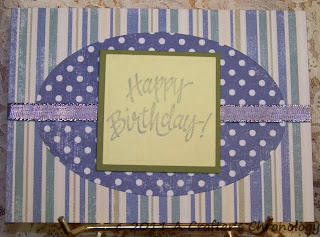 I purchased the paper at Tuesday Morning , but have torn the paper pad apart, so I don't know who made it.  The greeting is by Stampin' Up!, and I used Fresco "Vesuvian Ash" ink to stamp it.  I used Spellbinders' Classic Squares Large & Small for the greeting.  The polka dot paper was cut using Creative Memories' Oval Patterns. 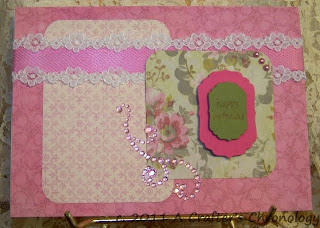 August 23 is a busy day on my calendar!  One anniversary and two birthdays make it an easy-to-remember day.

First up is a birthday card for a dear friend.  I started with a sketch from the 'net, but I'm afraid I don't know where I got it.

The paper is from K & Company, my first time using their paper.  I stamped "Happy Birthday" by Hero Arts  in Lightening Black Brilliance ink by Tseukineko, then cut it out with Labels 4 by Spellbinders, layering it on a larger piece cut with the same die. 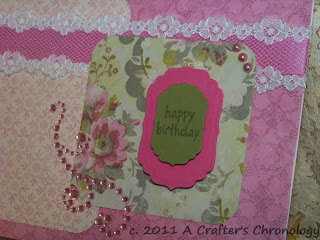 The pink ribbon under the lace is by Stampin' Up! (no longer available), and the lace is from Home Sew. 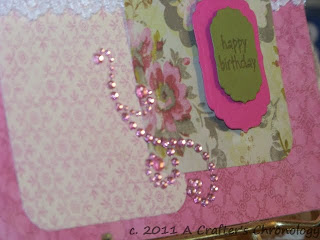 I believe the pink bling is by Recollections, which you can purchase at Michael's.

Email ThisBlogThis!Share to TwitterShare to FacebookShare to Pinterest
Labels: Cards


Using crocheted flowers on cards is popular right now, so I thought I would try my hand at making some.  It's been a long time since I've done any thread crochet, so working with the #10 thread took a bit to get used to again.   After trying several sets of directions, I settled on the ones here, and made several flowers.

The white and black one in the upper left corner was done with two strands of thread, but the others were all a single strand.  And the ones that look white and yellow are really off-white. 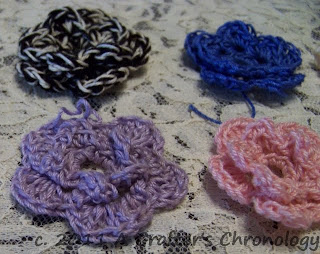 I will put a large brad or button in the center.  Now to make a card to use one of these on!

Our wet spring, which has been followed by a dry summer, has caused problems for local farmers.  Our herbs have been growing faster than we can use them, but not so the vegetables.  We finally resorted to watering the vegetable garden, which is beginning to yield its bounty.  Tuesday evening's dinner included yellow squash sauteed in margarine, to which we added a can of diced tomatoes, and seasoned with fresh ground pepper, some thyme, and a pinch of salt.  Yummy!  After dinner, Sarah and I went out to see what else needed to be picked, and found these cucumbers 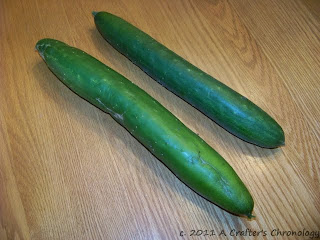 which measured 13.5" and 14.5" and weighed 17.2 and 23.8 ounces respectively!  There are a lot more cukes coming, from which we will probably make sweet relish (if anyone has a good recipe, let me know).  We also picked this yellow squash 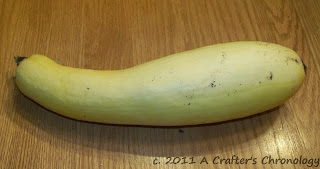 In addition, we picked a pound of tomatoes - mostly Roma's.  A lot of the other hybrid tomatoes have end rot, which Sarah tells me happens because of growing conditions (i.e., too little rain).  Sarah harvested her garlic and some onions quite a while ago, and they are drying in the garage.

Simple Joys is finished!  I loved stitching this design, and was rather sorry to see it come to an end. 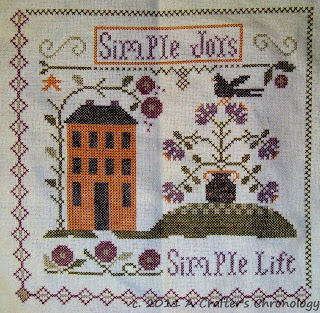 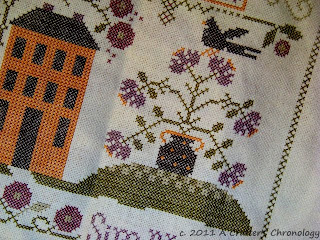 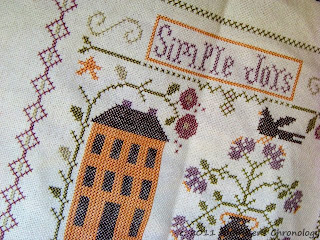 I will frame this one and am hoping I have a frame I can use, but I suspect all my square ones will be too small.

Up next - and already started - is Coffee Menu - also by Little House Needleworks.  I'm stitching this one for Sarah.

Last week was quite a week for errands!  I had a few more to do on Friday afternoon, so I headed out to do them in the afternoon.  One of my stops was JoAnn's (it's the only fabric store in the area, although our WalMart does still carry a good selection of fabric, which I've often found to be of better quality than what they sell at JoAnn's, but that's another post.)  I decided to check out the special patterns in the quilting area, which include a lot of bag patterns.  You know how I can't resist a good purse pattern, so when I spotted Juliet by Me and My Sister Designs, I knew I had to get it.  It didn't hurt that I had a 40% off coupon, either! 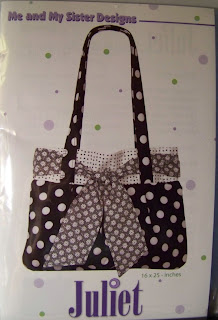 The entire bag is cute, but I especially love the bow that is threaded through the handles on the upper edge of the purse.  I have seen other patterns with a similar bow treatment.

This pattern doesn't require much fabric, so I'm sure I'll be able to find enough in my stash to make it.  It calls for 1-1/4 yards for the exterior and handles, 3/4 yard for the cuff and pockets, and 1 yard for the lining and tie.  I may need to add extra pockets to the inside because I love pockets, but I'll have to carefully read through the instructions first.

My motto:  A girl can never have too many purses!

Jessica over at Sew Chic is giving away an OttLite!  I have one in our living room that I use when I am cross stitching, and it cuts down on eye strain tremendously.  Hop over to her blog and sign up!

Make Do and Mend Mondays

It's Monday, and time for another Make Do and Mend Mondays post. 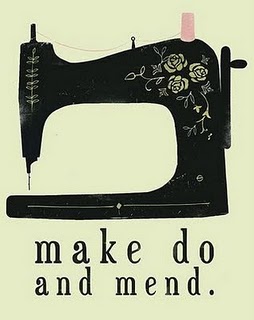 Have you ever purchased one of these over the sink shelves? 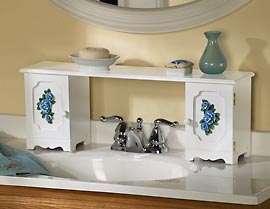 (This one is from Collections, Etc., and would look nice in my bathroom.)  Unfortunately, if you use the water from your bathroom sink, the unit probably won't last long.  Quite a few years ago I had one of these, and it started rotting because of all the water that got under and around it, so rather than discarding it, I had my husband cut off the shelf, which I discarded, along with one of the boxes.  I was left with 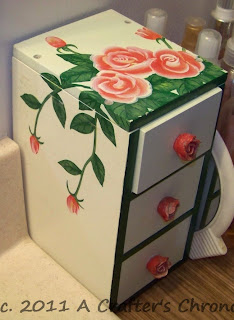 which I covered with clear contact paper.  It now holds dental floss and barrettes.  So for a few pennies' worth of contact paper, I have a cute little box that is functional.  Maybe all that water wasn't a bad thing?