The Lord is Great 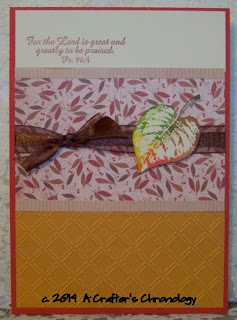 This card began by creating the leaf.  I inked the stamp with four colors of Distress ink:  Worn Lipstick, Vintage Photo, Mowed Lawn, and Mustard Seed.  After stamping it on white cardstock, I cut it out.

The bottom yellow piece, I embossed with Wicker Weave (Cuttlebug).

The patterned paper is from the Autumn Melody matstack by DCWV, which appears to no longer be available.  (I bought mine at Joann's.)

I have to be honest and tell you that I have no idea what I used at the top and bottom of the patterned paper!  It doesn't look like ribbon, so it is probably just strips of patterned paper.

To finish the card I tied a piece of ribbon around the middle panel. 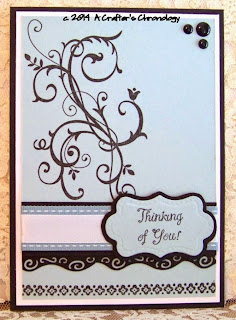 On a piece of Soft Sky cardstock (Stampin' Up!), I stamped one of the images from Stampin' Up!'s Baroque Motifs using Versafine Onyx Black ink.  I love that stamp set; too bad it's retired.

I then cut a piece of black cardstock and punched one long edge using a Fiskars Border Punch; unfortunately, they don't put the names of the punches on them and I bought it long before I realized I should label things.  The blue stitched ribbon was a clearance item from Stampin' Up!, and the white ribbon on top of that is from my stash, probably purchased at the dollar store.  At the very bottom of the card I stamped one of the borders from Fiskars' Borders-a-Plenty, again in Black Onyx ink.

The sentiment is Thinking of You Script by Sweet Impressions.  I cut it out using one of the Spellbinders Twisted Metal Tags and Accents, then drew around it to cut a mat out of black cardstock.  To finish the card, I used some enamel dots from My Mind's Eye, which gave some interest to the empty space on the top right of the card. 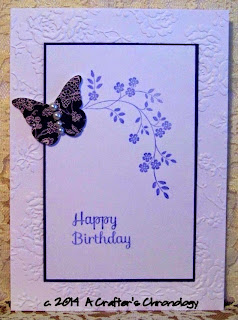 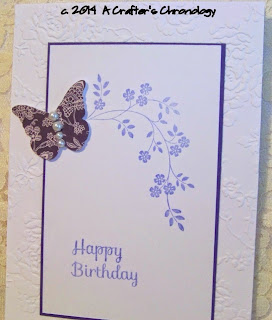 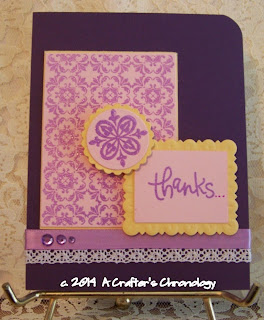 The only time I have used this stamp set - Posh Motifs and Trimby Inkadinkado - is on this card, which is really too bad since I really like it!  Anyway, I started by stamping the large image on Pink Pirouette cardstock (Stampin' Up!) using Heliotrope ink by Color Box.  I used one of the dies from the Classic Rectangles Large (Spellbinders) to cut it out.  I cut a slightly bigger mat from a piece of yellow cardstock from my stash.  Using the same ink I stamped another motif from the set on the pink cardstock, cutting it out with one of the Standard Circles Small (Spellbinders); it was layered on another piece of yellow that I cut out with one of the Spellbinders Classic Scalloped Circles Small.  Finally, I stamped my sentiment (Thanks by Simon Says Stamp), and cut it out using one of Spellbinders' Classic Rectangles Large, and layered it on top of one of the Spellbinders' Fleur de Lis Rectangles.

All of these elements were mounted on a piece of Elegant Eggplant cardstock (Stampin' Up!), along with a piece of lace and ribbon from my stash.  The gems are by The Paper Studio, and I attached them with Glossy Accents, which is a really strong adhesive. 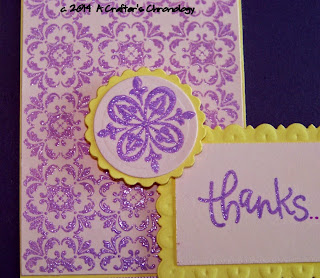 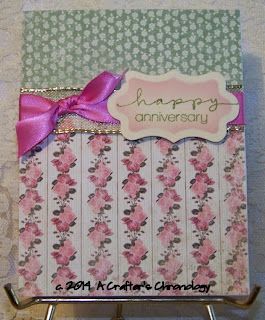 This card doesn't need much explanation, so here are the "ingredients":

I just glanced out the window only to discover it's raining.  Again.  Since the 5th, we've had at least 6" - 7" of rain, usually accompanied by violent thunderstorms.  On Friday I went to an appointment, and learned upon arriving at the building that the power was out.  I decided to go to the home improvement store before returning home, and they were on generators.  It turns out a large section of town was without power, most likely because of water getting into the underground electrical cables.  Enough already!

Most of the cards I make are inspired by ones I find on the Internet via Pinterest.  The original for this one - which I copied almost completely - is found here. 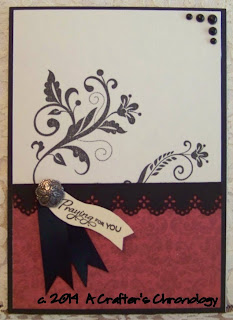 I started by stamping two of the designs from Stampin' Up's Flowering Flourishes set on off-white cardstock using black ink.  I adhered this on a black piece of cardstock along with decorative paper from the Mirabelle paper pack by The Paper Studio.  For the divider between the top and bottom of the card front, I punched a strip of black cardstock using the Eyelet Lace punch by Martha Stewart.  Also from the black cardstock I cut two small rectangles, adding a ribbon edge to one end of each.  From off-white cardstock, I cut a wavy banner; I stamped my sentiment in black ink, curving it to fit the banner.  The sentiment is from the Joy for the Journey stamp set from Verve (no longer available).  The brad I used to attach the banners is from Stampin' Up!  Finishing the card are the pearls in the upper right corner are by Recollections (Michael's). 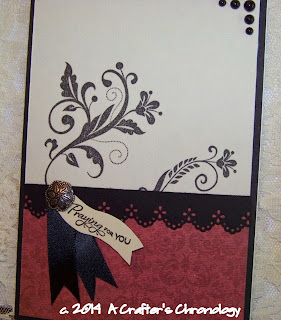 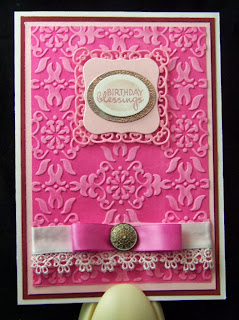 I started this card by running my cardstock through my Cuttlebug using the Vintage Wallpaper embossing folder from Stampin' Up.  It's no longer available, but you can probably find it on eBay.  I ran a white pigment ink pad lightly over the top of the embossing. 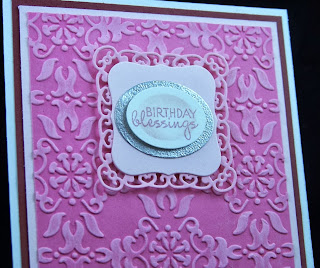 The sentiment is a single stamp by Verve (no longer available), that I stamped with Versamagic Perfect Plumeria ink.  I then cut it out with one of the Classic Oval dies by Spellbinders; before I removed it from the die, I sponged on some Versacolor Ash Rose ink.  I cut another oval, ran some Versamark ink (a clear, sticky ink) over the edge, then embossed it with some silver embossing powder.  I also cut one of the Spellbinders Labels One and layered a Spellbinders Decorative Labels One underneath. 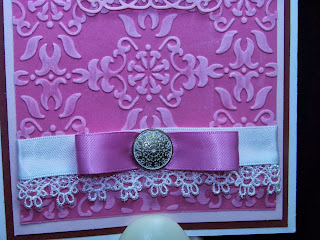 On the bottom of the card, I placed some lace underneath a white ribbon, then affixed a folded pink ribbon in the center using a brad from the Stampin' Up set Antique Brads.