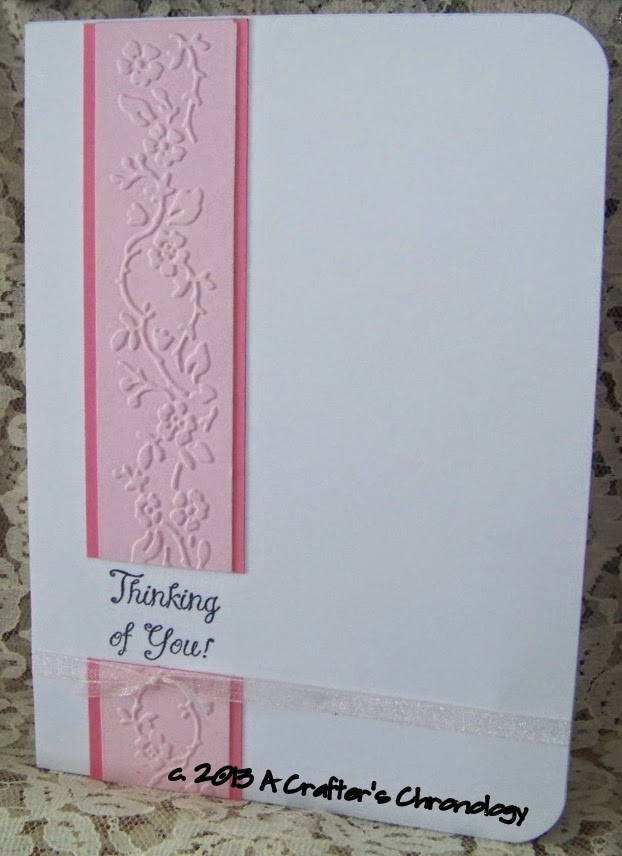 The pink paper is by Stampin' Up! - Pink Pirouette and Regal Rose (retired); I embossed the lighter color with Rosa by Anna Griffin (Cuttlebug).  Isn't it pretty?  I stamped my sentiment (Sweet Impressions) on a white strip using black ink.  I tied a piece of ribbon below the strip.  Finally, I used my 1/2" Corner Chomper to round both the right hand edges.

Email ThisBlogThis!Share to TwitterShare to FacebookShare to Pinterest
Labels: Cards, Cuttlebug, Stampin' Up

This is another of those simple cards that I really like. 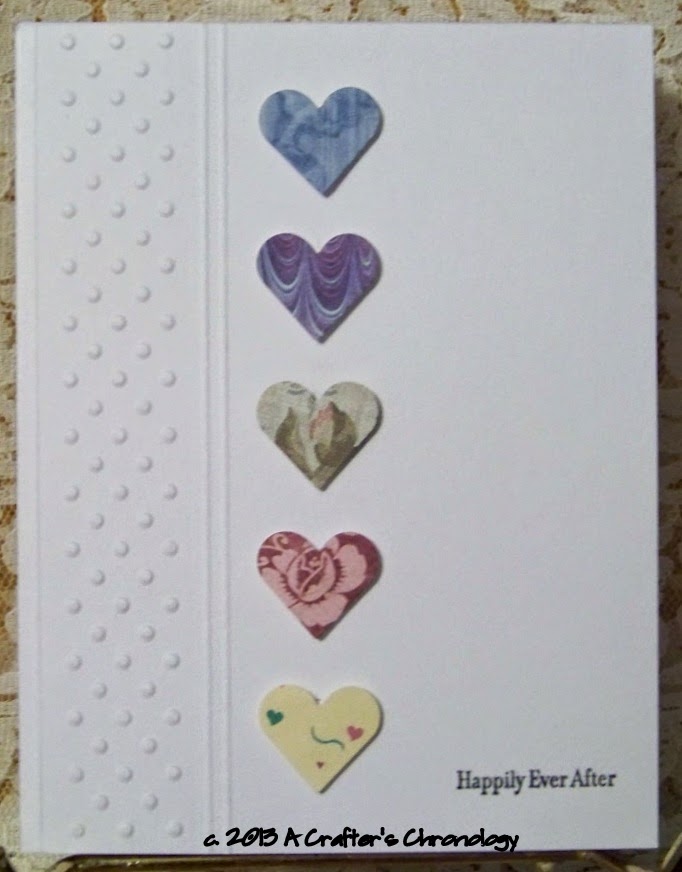 All the hearts were cut with paper from my scrap box using a Spellbinders Classic Hearts die.  I embossed the left side of the card using the "Dots" embossing folder from Just My Type by Cuttlebug.  It left a ridge on the inside edge, so I fixed that by using my Martha Stewart Scoring Board to score a line from the back side of the card.  The sentiment is from the Lots of Thoughts set by Stampin' Up! (retired, but check eBay). 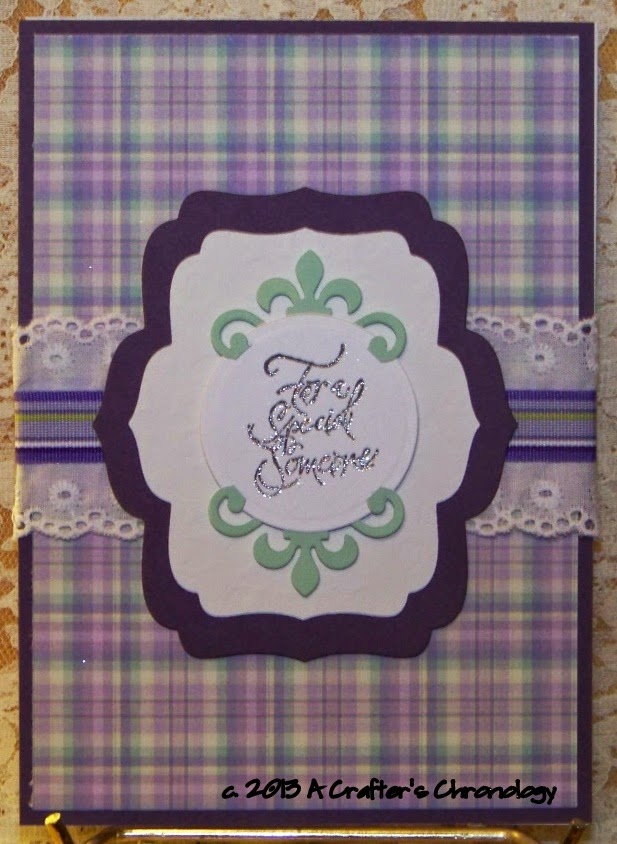 I stamped the sentiment, which is from the Watermill set by Stampin' Up! (retired), then traced over it with a Sakura Clear Stardust pen.  I cut it out with one of the Spellbinders Standard Circles Large.  I also cut two sizes of Spellbinders Labels Five and two of the pieces from Spellbinders Fleur de Lis Accents, layering all of them together.  The lace and ribbon are from my stash.  Simple card.

This is an older card that I don't think I ever shared.  It's one I kept detailed notes on, so I am glad to find the information in case I ever want to make it again! 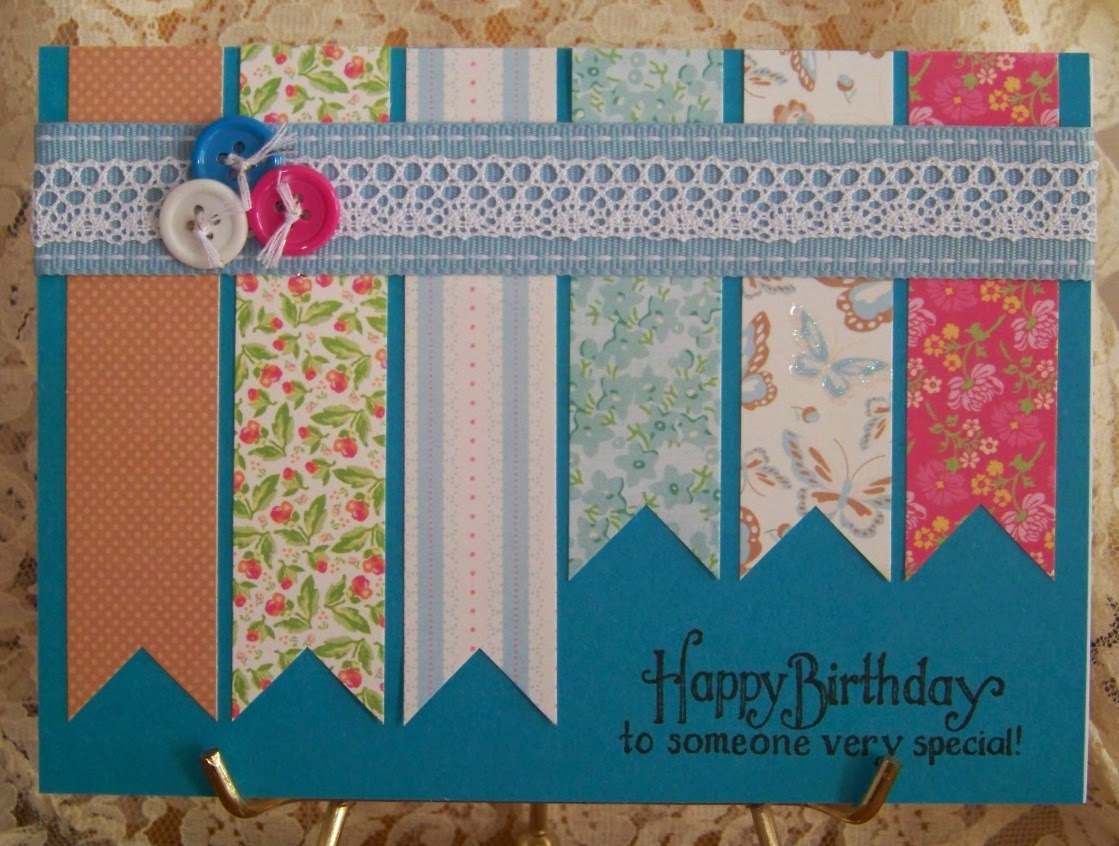 The papers are from the DCWV Spring Fling mat stack, which doesn't seem to be available anymore.  I cut six strips, each 1" wide; three are 4-1/2" long, and the other three are 3-1/2" long.  I measured up 3/16" and cut the ribbon end, then attached them to my card base, placing them 1/8" apart.  The blue ribbon across the top is from Stampin' Up!, and the lace from my stash.  I used baker's twine through the middle of each button between gluing them to the ribbon/lace.  Finally, the sentiment is an old stamp from Holly Pond Hill, which I stamped with black ink.

I do apologize for being so quiet the past six weeks.  My last scheduled post went up the week after our dog died unexpectedly following surgery.  A week later, we adopted a third cat!  That was unplanned; we'd had to go to Fairport, a village about half an hour from our home (yes, we call some of the towns around here villages), and thought we might go by the local humane society, but they had only older cats on the website, and we wanted one a bit younger.  On our way home, we stopped by the pet store to pick up some things, and as we always do, stopped to look at the cats.  (Two of the local shelters have cats at the store.)  One kitty stole our hearts!  When I picked her up, she nuzzled my nose and gave me a hug!!  We weren't able to take her that night, so they held her for 24 hours, and we brought her home the next day. 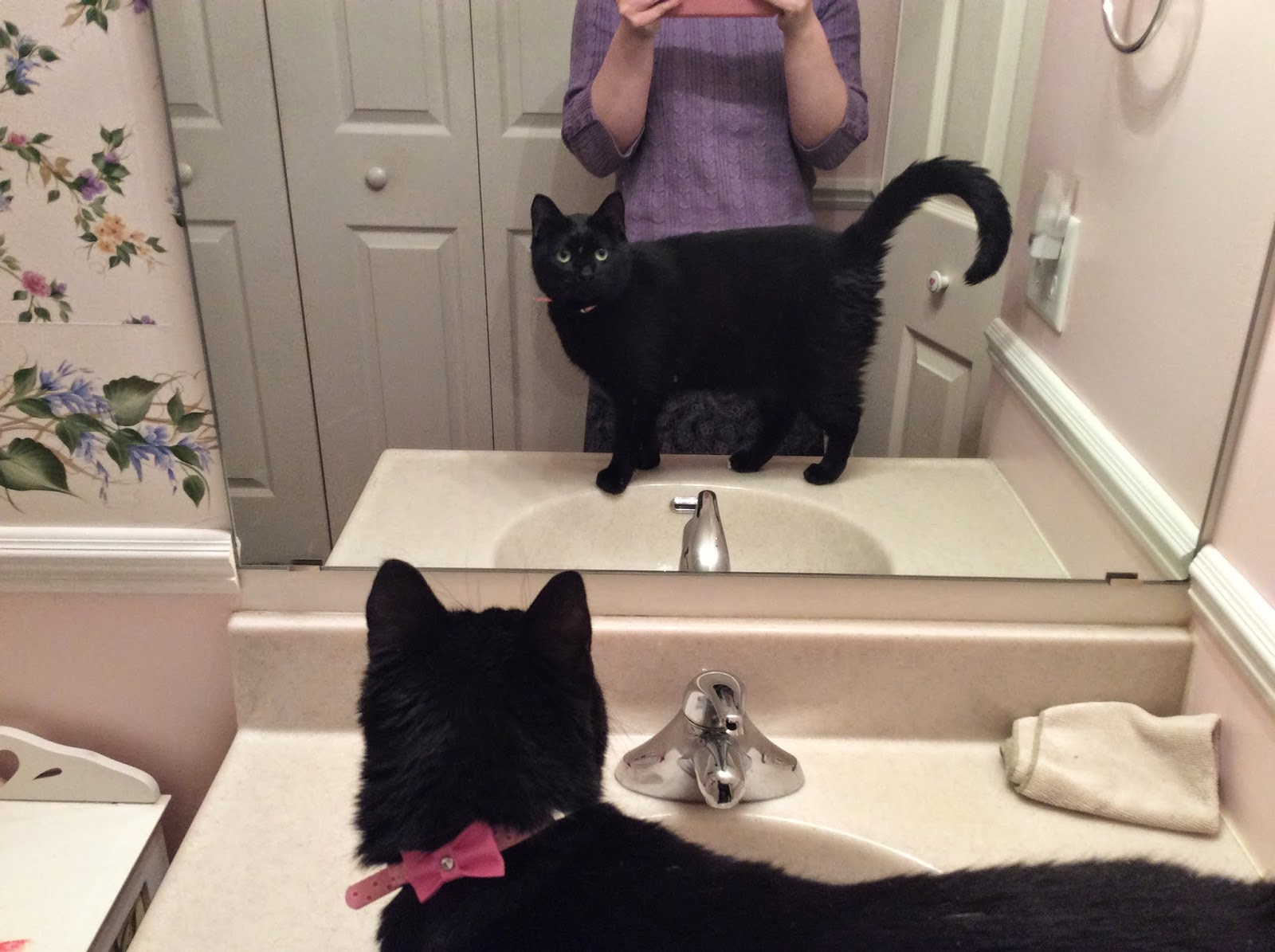 Three year old Katie, as we've named her, is so sweet, but a bit crazy at times.  She's still suffering the after effects of having an upper respiratory infection that she picked up at the shelter; she was on multiple courses of antibiotics, and our vet thinks it's going to take a while for her immune system to get back to normal, so meanwhile, we wipe her nose and clean up the walls and floors after she sneezes. 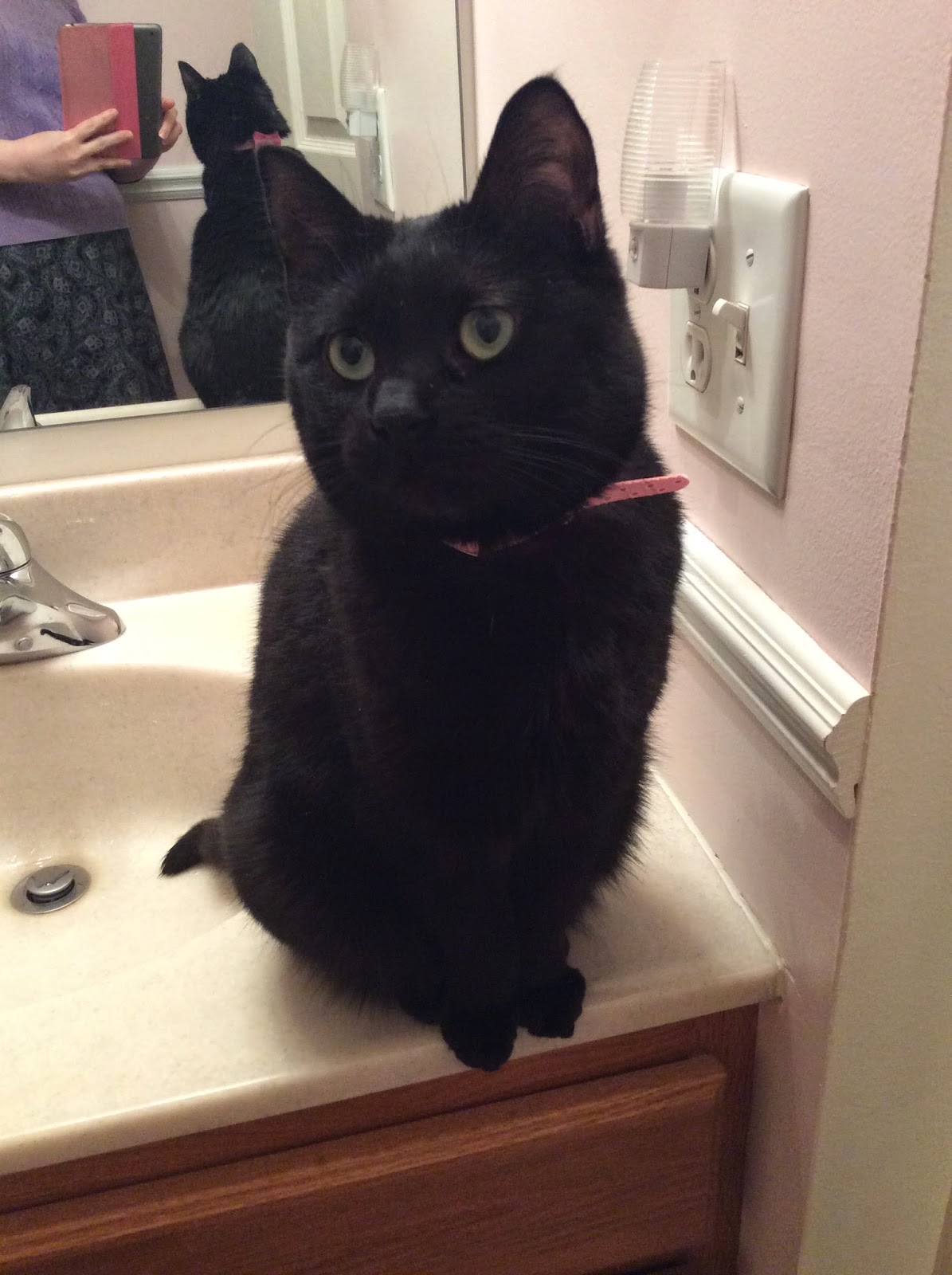 We are happy to say our three cats are co-existing rather peacefully, although there's always room for improvement.  Happily, Katie is very laid back and doesn't mind if she gets chased or hissed at.  (Lately, she's doing her share of the chasing!) 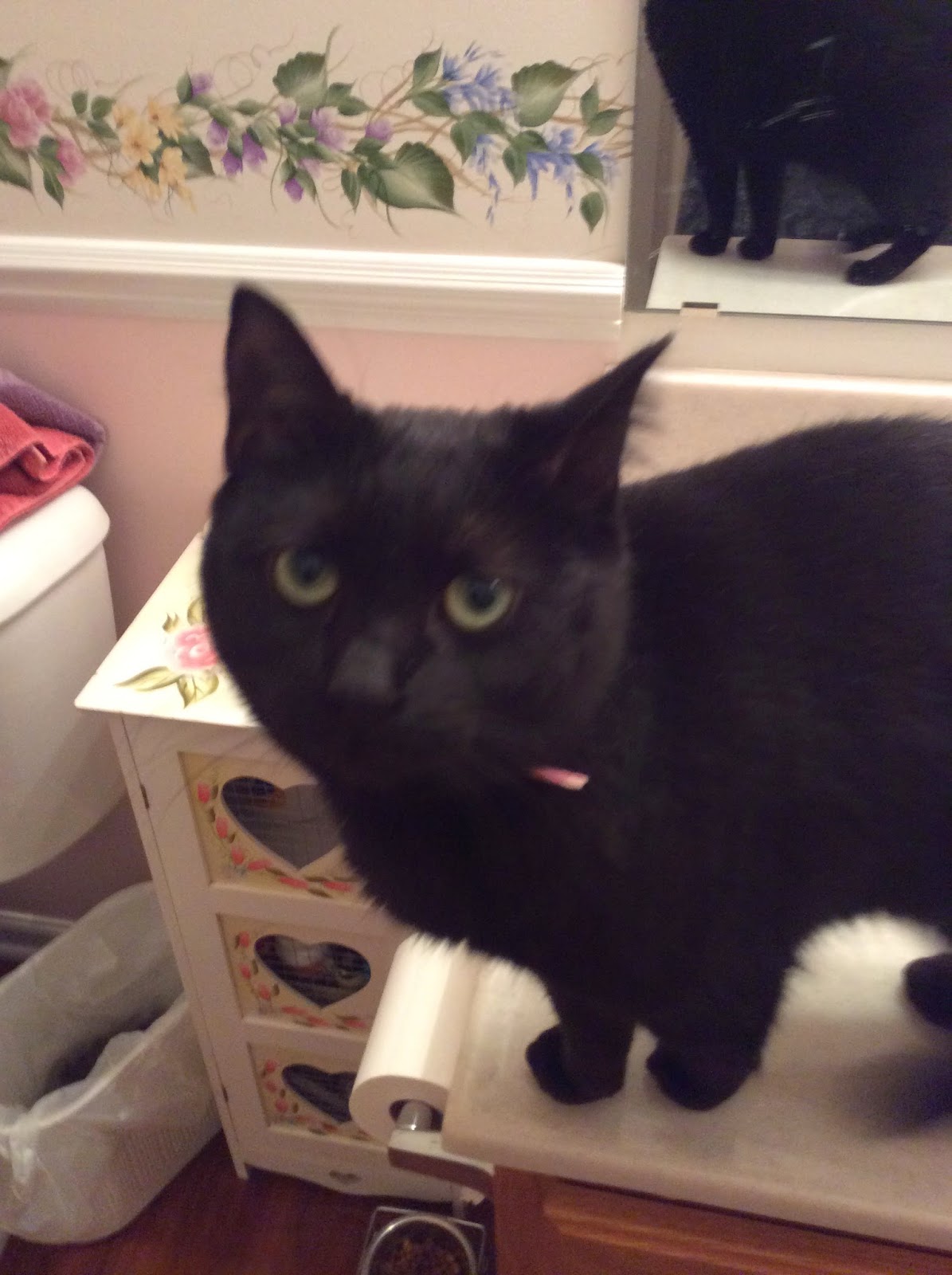 I've also been dealing with what my doctor says are severe allergies.  This has been going on since mid-February.  My coughing was getting worse and worse, so I finally went to the doctor, who put me on Zyrtec and a strong cough syrup.  A second refill of the cough syrup wasn't working, so this week I've been on Prednisone as a last resort.  Unfortunately, Pred and I do not get along, and I've been just miserable.  Two more days, and I hope to feel better, even it's just from being off the Pred.

Despite feeling poorly, I managed to write and schedule a few blog posts tonight.  I do hope to get back to some other crafts besides cardmaking.  Or perhaps the flowers will bloom - after the horrible winter we had, everything is taking it's time coming up.  Until then, enjoy my cards.