Staying Warm, Or Trying To

Winter arrived with a bang on Saturday.  It's cold, it's been snowing, and that's not going to change.  It's more like January than late November.

As I sit here typing, I am covered with a blanket I finished crocheting over the summer.  I had started it several times using one pattern, but it just wasn't coming out right, so after I ripped it out twice, I decided to go with a tried and true pattern. 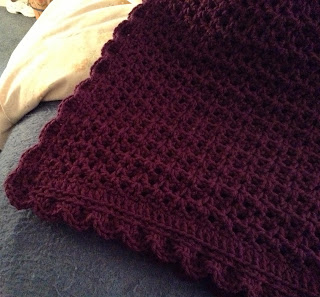 The pattern is the Little V-Stitch Blanket from Lion Brand, which I crocheted using about 1-1/2 skeins of Caron One Pound Yarn.  I made it a lot bigger by using a longer foundation row.  Once it was nearly 39" square, I decided to add a scalloped border for a nice finish. 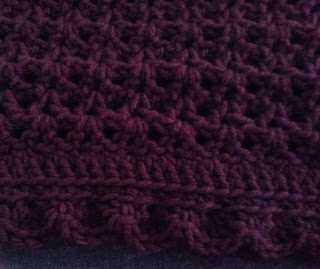 My blanket is nice and warm, as well as plenty large to tuck under my arms and still have it cover my feet.

In other news, things here are still crazy.  I am looking forward to finishing physical therapy at the end of December (thanks to insurance changes, but I am SO ready, even if I don't meet all the goals I "should"), but for now, I still go twice a week, and one of those days we go to an early afternoon doctor's appointment, usually for Phil, and then I take the 5:30 physical therapy slot, the last of the day.  Phil's Myeloma is still not under control, and we have added two additional chemo drugs (in pill form) over the last month.  We found out at his oncology appointment this past Wednesday that his oncologist is moving to the cancer center a mere 10 minutes from our house, which will be very helpful since we may well move to both an oral and injectible chemo once that switch takes place.  On top of that, his kidneys are failing again, and we are carefully watching the blood markers that will indicate when he will need to begin home dialysis again, after four years off all dialysis.  We are hoping to hold off the surgery needed to prepare until after the holidays, but should know on Tuesday whether we are keeping our December 2 appointment with the surgeon.  See why I am ready to be done with therapy?

I remain thankful to God for sustaining me - us - through the past four months since my knee replacement and the craziness of all these appointments.  My fibromyalgia is acting up, though, so I am counting down the remaining 10 therapy appointments with great anticipation.

Before my surgery, I completed two other projects. 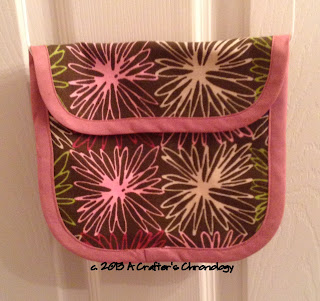 My daughter had purchased a little purse like this one, from which I made a pattern and sewed my own.  I had thought I would use this after surgery when I went to doctor's appointments, but as it turned out, I only used it while in the hospital.  It was just large enough for my cell phone, a small packet of kleenex, and . . . well, I forget what I put in it!  But it was very helpful.  And by the time I saw the doctor for the first time, I was using a cane and could carry a regular purse.

For about three weeks, I had to use a walker to get around.  After looking around on the Internet for free patterns for walker totes, I came up with my own. 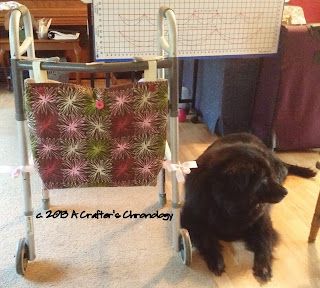 (That's Kelly helping me with my picture taking.)  My thought was to make a bag large enough to turn into a tote bag once I no longer needed it for the walker, so the ties you see on the sides were sewn on by hand, and the straps on the top were stitched on using buttons (I sewed through the buttons and the straps).  These have also been removed.  I've stitched webbing straps to one side of the bag, but alas, it remains on my sewing table, waiting for me to take the 15 minutes to pin and sew the other sides down.

A note on the fabric:  it's a heavy-weight utility-type fabric that I found in the remnant bin and paid next to nothing for.  It was a great purchase since I got two projects out of it, and still have some left over.