On Saturday, I braved the craft room - being very careful with all the sharp things in there <grin> - and turned Sunflowers 'N' Crows into a pillow. 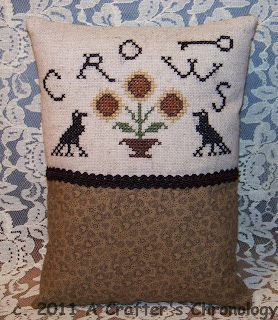 I am pleased to report that all my fingers are still intact.

Vonna, The Twisted Stitcher, has been graciously compiling tutorials for finishing and sharing them on her finishing blog.  I was reading her latest tutorials and was intrigued when she said to iron interfacing on the back of finished projects such as pillow ornaments.  Now I've been sewing since I was young, but it never occurred to me to do that.  I tried it with this pillow though, and am amazed at the difference it made.  I ended up using interfacing on all the fabric pieces, and it made for a crisp, yet soft, pillow that should maintain its shape well.  Thanks, Vonna! 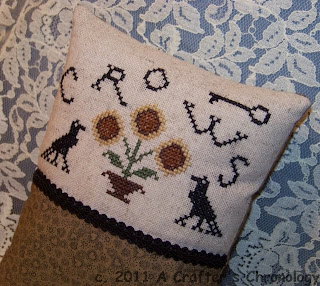 As I was looking at the precarious pile of items on my sewing table to be completed, I decided that I will finish the Blackbird Designs Reward of Merit pincushions that I've stitched next.  We have only one medical appointment this week - on Monday afternoon - so I am hopeful the week will be quiet. 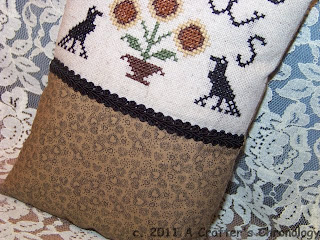 Heidi commented that she hoped my husband is doing well.  His recovery from this surgery has been  much more difficult than we anticipated, although he is progressing as the doctor expected.  The dressing on his skin graft donor site has nearly fallen off, but the skin underneath is raw (think large rug burn - OUCH!), so we keep it covered.  And the 2.5" nearly circular area on his wrist where the melanoma was removed is healing, but still looks yucky (for lack of a better term).  It will probably be a long time before the area looks more like a cut than, well, what it looks like now.  Unfortunately, his chemo meds have left him exhausted, and the surgery on top of that hasn't helped.  Because his cancer numbers have fallen precipitously (he's within six points of returning to normal range), the oncologist agreed to a two week drug break, instead of the usual one.  Hopefully this will make a difference.  Thanks for asking, Heidi.

I noticed the leaves suddenly turning this past week, although the weather has been warm.  Come next weekend, though, it is supposed to turn chilly, with highs in the very low 60s (F).  Saturday IS the first day of October, so we can't hope for too many more days in the 70s.

Make Do and Mend Monday

I'm joining in Heidi's Make Do and Mend Mondays with a bit of a twist today. 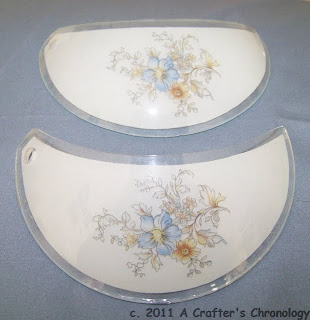 These pieces, seven in all, came from a small touch lamp that started looking worn after many years of use.  My husband didn't think we could re-paint the metal parts and retain the "touch" properties, so I saved these curved pieces from the "shade" and tossed the rest. 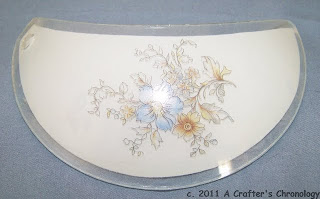 If you look in the upper left corner, you can see these have holes, and there are protectors on either side.  They are so pretty, and I couldn't bear to part with them (this is a continuing theme with me!).  My original thought was to string them on fishing line and hang them from something to make a mobile or wind chime of sorts.  But now I'm not sure that's a good idea because if they knock against each other, they could break. 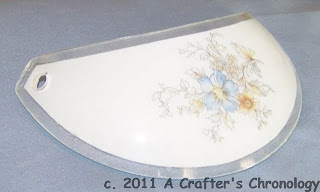 So what do YOU think?  Do you have any ideas about what I could do with them?  Or would I be better off throwing them away?  I can't wait to read your ideas!

Email ThisBlogThis!Share to TwitterShare to FacebookShare to Pinterest
Labels: Make Do and Mend Mondays


The final stitches were put into Primitive Betty's Sunflowers 'N' Crows the other night.  What a fun little stitch that I can't wait to finish finish!  I think I'll make a pillow; maybe tomorrow I can look through my fat quarters and see if I have something appropriate to use. 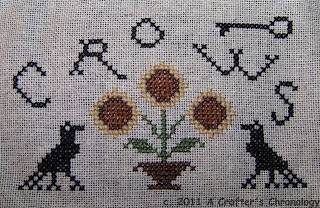 The picture is a little dark, but I used 28 count Carolina Linen by Charles Craft.  It's an Aida but with the feel of linen.  The color is Sand.

The stitches came out of my fingers on Tuesday afternoon and while they were tender at first, I can now type with only a bit of discomfort.  The doctor said it would take up to a year for them to feel as normal as they ever will, given my fibromyalgia.  Every time I think about my accident, I am thankful anew that it wasn't worse.  If anyone missed the story, you can catch up here.

My next project, once Sunflowers 'N' Crows is finished, will be another freebie, this time from With Thy Needle and Thread.  It's another autumn crow design and you can see it here.  I thought it would be fun to try my hand at coffee dying some fabric, and after some fussing, here's my finished result. 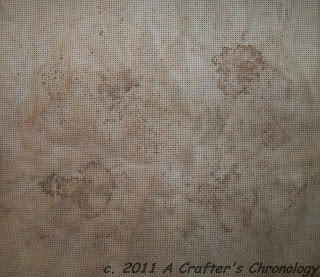 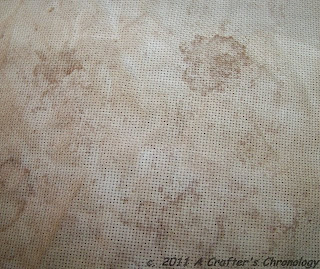 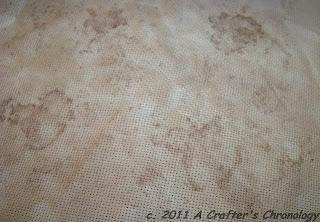 Yes, its all the same piece of 18 count Aida, which started out as Antique White.  I will be using a mix of DMC threads, some which the designer suggested, and some which I chose myself.  I didn't want to use the greens for the letters, so I pulled some browns and greys.  Once I begin stitching, I might change my mind, but that's the prerogative of the stitcher, right?

For anyone who loves to see pictures of other people's injuries, you can see what I did to my fingers here.  They're cleaned up nicely, so all you see is the cuts and the stitches .  I have to keep them bandaged, which is good since I hit them often!

A quick post to show you what I've been working on while I recover. 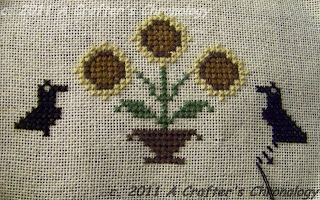 This is Primitive Bettys' Sunflowers 'N' Crows.  You can find the free chart - and many more - at http://www.picturetrail.com/sfx/album/view/18669910

Too bad I won't be able to do the final finishing until my fingers feel better.

I had hoped to have several blog posts written, ready to go, but God had other plans.

First, my husband is having a difficult time recovering from his surgery.  He has four wounds, the worst of which is the skin graft donor site.  He is supposed to have the various stitches and staples removed on Thursday.  That is, I suppose, if he's over what appears to be a stomach bug, which assaulted him earlier this evening.

What is really holding me back is a difficulty typing.  On Saturday night, I was cleaning up after making a few things in my food processor, and instead of blowing the few remaining bread crumbs off my food processor blade, as my brain told me to do, I used my left hand.  Oops.  I now have four stitches in my left index finger and three in the left middle finger.  I'm not allowed to do anything which keeps my hand in water for any length of time, such as dishwashing, and Phil can't get his right arm wet, so the three young people are pitching in.  I did my best to cook on Monday, but it was painful and very slow, so I've arranged for meals to be brought in on my next two cooking days.  My stitches come out next Tuesday.

The only craft I can do is a bit of cross stitch, although I have to stop frequently and allow my fingers to rest and stop hurting.  I am thankful, though, that all my fingers are intact, that it's the left hand (I'm right-handed), and that my thumb wasn't affected.  Typing is difficult, as you might imagine, so for now, my blogging break will continue.  I expect the fingers will remain tender for a while, especially the index finger, where the laceration goes up onto the fingertip.  Meanwhile, I'll try to compose some blog posts in my head.