After adamantly declaring that I would not go shopping on Black Friday, I had two 50% off coupons from JoAnn's that I wanted to use. My lovely daughters took me out, even though they had gone shopping at Eastview Mall earlier in the day. Fortunately, my hunch that the crowds would be significantly reduced by waiting until after dinner to shop was correct. In fact, JoAnn's was exceptionally quiet, as was Michael's. A. C. Moore had more shoppers, but enough checkouts were open and we didn't have to wait to pay for our few purchases. The Christmas Tree Shoppes was crowded, but they didn't have what Sarah was looking for, so we weren't there for long. 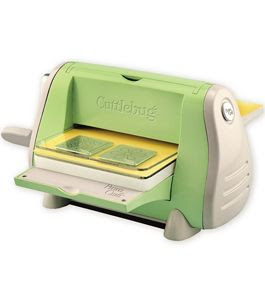 So what did I get with my 50% off coupons? After discussing it at length with Sarah and Grace, I purchased a Cuttlebug! I've had my eye on it for a long time, and knew that I could only afford it if I had a half price coupon. Grace plans to use it to make die cuts for her scrapbooking, while I want to use the embossing feature. The fact that it will accept dies from Sizzix is a plus. We picked up two embossing and two cutting dies since they were 40% off. I hope to try my new toy later today, but I have a great room filled with boxes of Christmas decorations that need to be cared for first. 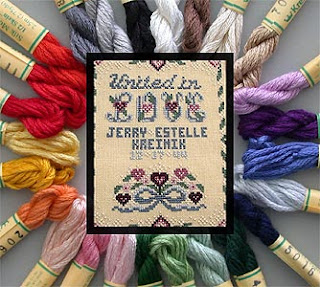 I also used a 50% off coupon on a Kreinik silk thread pack. I have never worked with silk thread and am looking forward to using it, probably for an ornament from the JCS 2007 Ornament magazine, which I mentioned here. It may well be 2008 before I get to it, but I'll just consider it a head start for Christmas '08!!
Posted by Ginny at Saturday, November 24, 2007 2 comments: 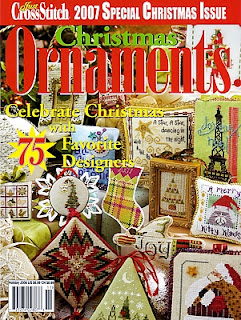 I picked up this magazine at my local cross stitch shop recently, and since I finished the smocking on my niece, Jamie Rae's Christmas gift, I'm allowing myself to start a new cross stitch project. Sarah and I went to A. C. Moore on Monday and I purchased (with a gift card) the DMC floss I'll need to do a number of projects. I've chosen an ornament from the magazine to begin - the one that is under the "75" and to the left. If you have a copy of the magazine, you can find the chart on page 33; if not, you'll have to wait until I finish and post a picture!
Posted by Ginny at Wednesday, November 21, 2007 1 comment:

Eight Things You Didn't Know About Me

My daughter, Sarah, writer of A Gardener's Gazette, tagged me for the eight things you didn't know about me meme. When tagged you must list the person who tagged you and post the rules. At the end of the post you must tag and link to 8 other people.

2. My favorite colors are blue and purple.

4. I learned more from homeschooling my two daughters than from 13 years of public education and another 4 years of college.

5. I was lead female singer in a church worship team for about 15 months; it was a life-changing experience.

6. My husband has Multiple Myeloma and resultant kidney failure.

That will have to do; if anyone else wants to tag themselves, go for it!
Posted by Ginny at Wednesday, November 21, 2007 2 comments:

Email ThisBlogThis!Share to TwitterShare to FacebookShare to Pinterest
Labels: Meme

I mentioned the nightgown I plan to make for my niece, Julia, in an earlier post. What I didn't tell you was the thrill of (1) already having a pattern, and (2) finding all three of the fabrics I need (yoke, main fabric, and piping) in my stash! If I hadn't taken the time to begin organizing my leftover fabrics, and finding many large pieces, I would have gone out to the fabric store and bought fabric. The reward of my frugality is that we can spend more money on family gifts, or save the extra for an unexpected expense. (We plan to spend only $160 on the four of us in our family, or $40 each, and believe me, it doesn't go as far as it did when our girls were little!)
Posted by Ginny at Friday, November 16, 2007 2 comments:

An Award From Deby

My friend, Deby, was given the "Encouraging Blogger Award" by her niece, and she is passing it on to all the bloggers whose words she reads, and that includes me! Thank you, Deby.

Email ThisBlogThis!Share to TwitterShare to FacebookShare to Pinterest
Labels: Award

I haven't been doing much crafting, mostly because my fibromyalgia is flaring terribly. On Monday, I felt like I had the flu. I am more exhausted than usual. And about two weeks ago, the persistent pain which I periodically get in my upper arms and shoulders returned. The pain feels like I've gotten numerous tetanus shots (which are given in the muscle.) When I first wake up, the pain is so intense that it's nearly impossible to move my arms. If past experience holds, this pain will be with me for three to six months, maybe more, then it will probably move elsewhere in my body.

As if that weren't enough, the weather has been changeable, which also causes me to flare. I think that Monday's flu-like symptoms may have been caused by the low pressure system which is flinging itself across our area tonight. It is going to turn cold with rain and snow. On Monday, and Tuesday morning, temps were near 60 degrees F. Thursday's predicted high is something like 38 F.

Sarah and I had our usual stitching night with our friend from my church on Tuesday and I did manage to put some stitches in my niece's pinafore (Christmas gift.) I spent a lot of time unstitching and fixing a spot where I picked up three pleats instead of two. I really should try to work on this project Thursday night while watching This Old House and CSI.

The other thing I managed to do was cut out a tote bag for Sarah, which she needs to carry her Sunday School class materials in. I will have to purchase webbing for the handles, which I plan to do when I go to JoAnn's with Sarah and Grace on Thursday afternoon.

I have soaked and dried two of the fabrics I need for Julia's nightgown (Christmas gift); the fabric I want to use for piping is still running pink . . . I will pick up some ready-made piping at JoAnn's just in case I can't get it to stop. Fabric that runs seems to be my lot in life. I did finally purchase some Retayne, but have yet to try it. As I have a front-loading washer, I will have to do the "on the stovetop" method, which will be a pain, but if it saves my fabrics, it will be worth it.

I will leave you with a wonderful blinkie I found:

On Monday, dd Sarah and I went on a shopping spree and had a great time! The first place we went was Golden Thread Needlearts in nearby East Rochester. I picked up enough cross stitch charts to keep me busy for a while - through the winter, I hope. 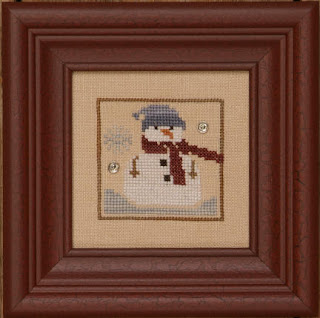 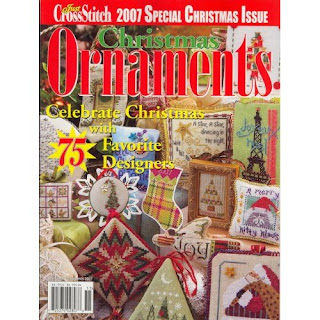 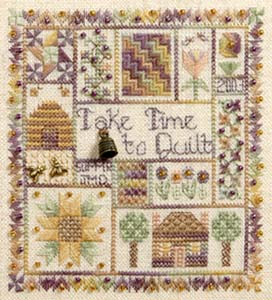 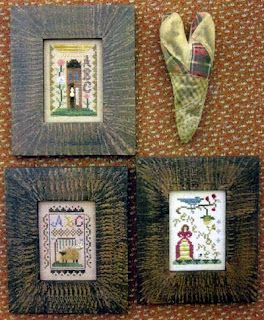 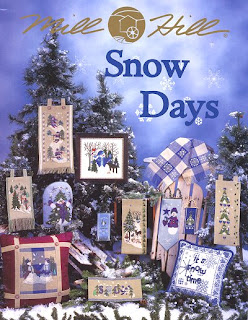 I've also downloaded many free designs from the Internet. What do I plan to do with all these designs? I've become interested in pinkeeps and would like to give them a try; thus most of the designs in the charts I picked up are small and hopefully quick to stitch.

Sarah and I stopped at A. C. Moore, where I picked out some perle cotton for my latest smocking project: a pinafore for my niece Jamie Rae. And lastly, we went to JoAnn's to get fabrics for some of the projects in Sew Pretty Homestyle. My parents gave me a gift card for my birthday, so I took advantage of the 45" home dec fabrics being on sale. 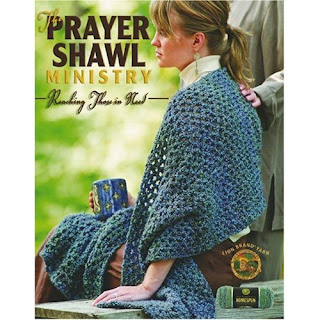 I also saw this book and one of the crocheted shawls in it caught my fancy, so I purchased a lovely Navy yarn (Lion Brand Jiffy) with which to make it. In several hours, I used one 3-ounce skein, so I believe the shawl will work up quickly. I plan to keep it for myself, despite the purpose of the book.

Alas, most of these projects must wait until Christmas gifts are completed. That's great incentive! Happy Stitching!