For my birthday last October I asked for cash instead of gifts, which I used to purchase an electronic cutting machine.  A Silhouette Portrait to be exact.  I haven't been able to play with it much, but I did use it to make some gift card boxes for Christmas (I'll share those at a later date), and I spent a lot of time on Pinterest looking for tips and links to free cut files.  I have also played with the software and am learning how to use it, although I have a long way to go. 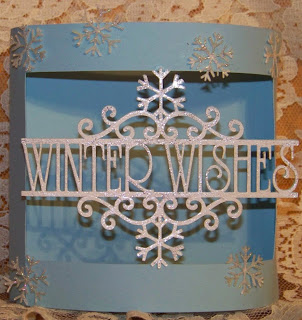 On Wednesday and Thursday evenings I made this Winter Bendy card.  The cut files (the digital files which the computer sends to the machine so it can cut them out) are from Bird's Cards  and you can find the cut file on this page toward the bottom.  Right below the cut file for the Winter Wishes card, you can see a picture of the Christmas Bendy card.  There are also quite a few other ones on the website.

The cardstock I used for this card was rather thin; I think a heavier cardstock would be a better choice in the future.  The cut file had two parts - the card and a separate piece with just the sentiment.  I cut the latter out of a piece of white cardstock, which I then inked with Versamark, and then embossed with a glittery embossing powder.  I carefully put glue on the back and put it over the sentiment on the actual card. 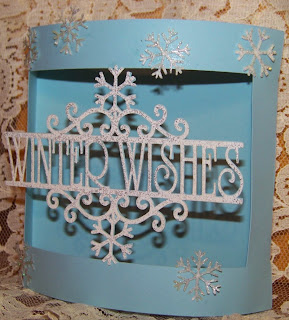 I felt the card needed something more, so I used one of Bird's snowflake files (I can't find them on the site right now, but if I do, I'll edit this post).  I had to make the snowflakes very small - around 3/4" - which made them very difficult to work with, but I did manage to emboss them with another glittery embossing powder.  Attaching them to the card was even more difficult, but hopefully they won't all fall off! 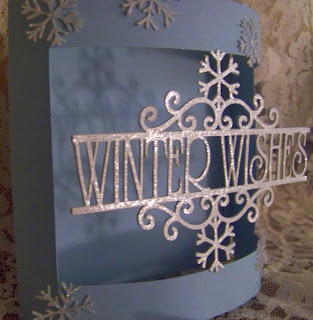 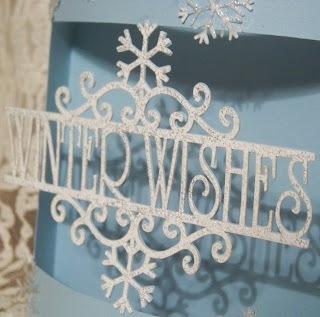